The “Gubana” is certainly indigenous to the Natisone Valleys, and it was born as a poor cake. A tale is told about a poor woman who had nothing to sweeten the Christmas meals with. So she prepared for her children a cake made with what she had at home: flour, eggs, walnuts and honey. The tale is very plausible, especially taking into account the poverty that always existed in the mountain villages, and in particular in the Natisone Valleys. The traditions report the “Gubana” as the typical cake of these valleys, appearing in several collective events. Above all, it is unfailing in weddings.
In Lasiz (Pulfero), for the Odpustak (Forgiveness) feast, on a September Sunday, married girls still use to go back to their original families, bringing with them a nice “Gubana” they prepared themselves. In Clenia (San Pietro), for the feast of S. Antonio Abate (January 17th), the “Gubane” were made in great quantities, cut in slices and offered, as a welcoming sign, to all strangers participating to the village feast. In Stermizza (Savogna), the children used to knock at the brides’ doors, singing: “You are invited, we are ready, put something in our baskets, it’s your duty!”. The lady of the house, not having confetti, gave them “Gubana” slices (2). 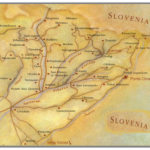 There are several different customs, from family to family, from village to village, that characterize the close links between the “Gubana” and its territory and the population living there. Up till now, in the Natisone Valleys, and in the adjacent areas where the population of the Valleys has moved, housewives make the “Gubana” for the main local festivities and celebrations. Many historical documents prove that the “Gubana” was born in the Natisone Valleys.Already in 1409, the “Gubana” appears among the 72 courses served by the Commune of Cividale to honor Pope Gregory XII. Mr. Alfeo Mizzau, Member of the European Parliament and President of the SocietÃƒ Filologica Friulana (Friulan Philological Society), wrote: “The “Gubana” was undoubtedly born in the Natisone Valleys, in the Slavia Friulana. It is mentioned in an agreement dated 1576, wherein it was stipulated that, among the royalties offered to the landowners, in addition to the rent, there was the “Gubana”. This was valued at a very high price , “una lira di venti soldi”. At that time, twenty “soldi” were the equivalent of a one-day’s pay for an experienced mason” (3). Another certain reference about the area of origin of this cake is given by the presence in the Natisone Valleys, and namely in Brischis, of the family name Gubana, before 1612 (first Baptism Register of the Parish of San Pietro). A Friulanized song composed in 1713, concerning the uprising of the people of Tolmino caused by the increases in duties and tolls , includes the line: “vin. Tripuzs di Chiauret e GUBANIS CU’L SAVOR” (4). In the document, dated Cividale 1738, the wine and cakes of the time are mentioned, including the “Gubana”: “Moscato, buzzolai, savoiardi, bovolini, polacchine, gubane…” (5).

Until 25 years ago, the “Gubana” was exclusively home-made. Mr. Laurencig, the old baker of Savogna, in an interview reported that: “For the record, our firm produced only bread until 1970 . “Gubane” were only made on special occasions and by request of the families”(6).
But in 1960 the bakery of Tiglio (Pulfero) had already started to produce and sell “Gubane”, although intermittently. Such activity was carried on in Loch, Scrutto, Clodig. On June 29th, 1965, for the Feast of San Pietro and San Paolo, the patron saints, in San Pietro al Natisone the 1st “Gubana” Contest was held. In this way, the “Gubana” got out of the home context, where it was made and consumed, and began to reach a wider and wider public, in Italy and abroad, thanks to an handicraft production. In 1973, the “Consorzio per la tutela della Gubana delle Valli del Natisone” (Consortium for the safeguard of the “Gubana” of the Natisone Valleys) was established, with the participation of most of the producers having premises in the following municipalities: San Pietro al Natisone, Pulfero, San Leonardo, Savogna, Grimacco, Drenchia and Stregna. Later on, with the establishment of other producers in the area of Cividale too, a second consortium was founded, in 1983, named “Consorzio zona d’origine della Gubana tipica di Cividale – Valli del Natisone” (Consortium of the area of origin of the typical “Gubana” of Cividale – Natisone Valleys). In order to support the enhancement and the social and economical development of the Natisone Valleys, of which the “Gubana” has traditionally been one of the most genuine cultural expressions, in 1990 the two bodies were united, giving birth to the “Consorzio per la tutela del marchio Gubana” (Consortium for the protection of the “Gubana” mark), whose aim is, among others, to obtain the denomination of origin of the “Gubana”. Indeed the “Gubana”, apart from an unquestionable historical and cultural fact, also represents an important item in the economy of the Valleys, and it can become the means to make up for the demographics impoverishment still going on today, also because of the unfortunate geographical position. The Natisone Valleys feature a largely mountainous landscape, with not too high peaks and only a few high-altitude plateaus suitable for summer pasture. The climate is temperate with high precipitation, which could foster the cultivation of the specific fruits needed for the “Gubana”. Agricolture is split in small plots of land, and tourism needs to be developed. 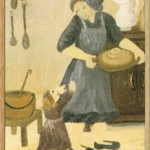 The “GUBANA”: ingredients and preparation method

The “Gubana” was a cake for the great festivities, because its ingredients were rich and costly. It is a sweet leavened dough, with a filling of equivalent weight, approximately. The basic ingredients are: soft wheat flour; sugar, sultana, fresh eggs; butter, vegetable oil made with the best seeds; walnuts, whole hazelnuts; brewer’s yeast; pine-kernels; salt. The receipt can be enriched by using candied fruits; Bagna rum, Grappa brandy, Marsala wine, wine brandy, Alchermes; honey; milk or powdered milk; vanillin, vanilla; vanilla infusion; mono-diglycerides of the food-grade fatty acids; soy lecithin; macaroon biscuits; biscuits; vegetable margarine. The “Gubana” is also characterized by it traditional, ancient shape, caused by its being wrapped up in the snail-shell shape, and by its color. The outstretched dough is leavened several times, then it is rounded diagonally over the filling and wrapped up in a closed snail-shell shape. This semifinished product is leavened again, until it reaches the classic volume; after that it is baked in oven to complete the organoleptic features. The baking takes about an hour, at a moderate temperature. The second leavening stage is critical for the success of this product. The leavened dough must definitely be soft and elastic, and it must be capable of sustaining and lifting the remarkable weight of the filling. The process was a jealously guarded secret handed over among the women of the Valleys. The ideal weight of the “Gubana”, needed for an harmony of values and an excellent result, is around 850 – 1,000 grams.

The “Gubana” is a typical cake, indigenous to the Natisone Valleys. The historical documents have always confirmed said typical origin. In the Valleys, the ancient custom of producing the “Gubana” at home for the main celebrations and local festivities still exists. The “Gubana” is therefore a very important cultural heritage for the population of the Valleys. The quality, the characteristic ingredients and the preparation methods are an ancient, important and deep-rooted cultural heritage for the inhabitants of this territory. The possibility that the name “Gubana” were used and allowed for a similar cake, produced elsewhere, would therefore an unfair and unjustified concession, and a punishment for these populations.